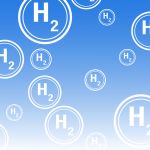 The universe is composed of a wide range of chemical elements that combine to form countless compounds. Each component has a fundamental role in ensuring its existence. The most common chemical elements are hydrogen, nitrogen and oxygen. The first of these is the most abundant so much as to constitute 75%. In addition to ensuring life to countless living species, hydrogen can also be used to generate energy, so much so that in recent years is particularly considered as a strength in a perspective of development of energy transition. Among the characteristics that make it particularly attractive for the achievement of a “clean” energy (when it burns it emits energy and water and the energy it releases is three times that of gasoline), it has, however, a not insignificant and not exactly virtuous aspect; that is that in nature it is never found in its pure state, in fact, but in combination with other chemical elements such as oxygen (H2O, water) and carbon (CH4, methane).

From this aspect it can be deduced that hydrogen, precisely because it is not pure, is an energy carrier and not a direct source as it is, for example, methane. Therefore to isolate it involves a chemical treatment that generates a significant expenditure of energy and therefore a significant economic investment.

Currently hydrogen (invisible to the naked eye) is produced almost completely (95%) through the reforming technology which, depending on the source with which it interacts during the process, assumes a different adjective associated with it: it is gray if it comes from the interaction with natural gas, black if from coal, brown if from lignite. This production is associated with significant carbon dioxide emissions. Then there is the purple one, produced by nuclear energy through the process of electrolysis.

None of these processes produce clean energy.

To obtain clean energy, there are two ways:

To obtain green hydrogen, the efficiency with the reforming process does not exceed 80%, while that by electrolysis is about 60% (it drops to lower values if the energy is not clean).

To obtain energy from it, there are two ways:

The Achilles heel of renewable sources is given by the discontinuity of their energy production. The performance of photovoltaics is a function of changes in solar radiation, which at night is zero, while that of wind power is conditioned by the intensity of the wind which is anything but constant.

One of the motivations to invest in the use of hydrogen as an energy carrier has precisely the objective of overcoming these limits. 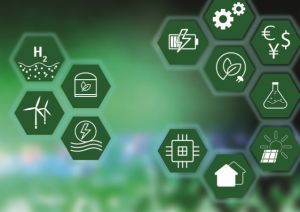 Therefore we are also thinking in these terms, that is to create a complementarity between the sources; when the electrical energy produced by the renewable source is higher than the demand it can be diverted to carry out the electrolysis of water and produce hydrogen, while hydrogen will be used to produce electrical energy in fuel cells. This method is certainly a solution, but it must be considered that the yield is currently very low (in fact if the yield for electrolysis is 60% and that of the cells always 60%, the total will be the product between the two: 36%). In fact 64% of the energy produced from renewable surplus is wasted. The objective of the near future will be to find alternative methods or improve existing ones in order to make hydrogen really competitive in the energy transition.

Despite these difficulties, institutions are working hard in projects involving the use of hydrogen.

In Italy in 2019, the “Integrated National Plan for Energy and Climate” (PNIEC) was presented, which led in November 2020 to a document of the Ministry of Economic Development called “National hydrogen strategy: preliminary guidelines”, which aims among its objectives to:

which are in line with European regulations and those of the European Green Deal.

In this regard, during the plenary session in May last year, MEPs expressed their views on the Commission’s proposal of July 2020 (“A hydrogen strategy for a climate neutral Europe”), arguing that green hydrogen is the only one capable of contributing in a sustainable way to the achievement of climate neutrality in the long term and encouraging member countries to join forces in the production and technological innovation aimed at its production.