Young people in Europe: their activism rises to 58%

European Commission research certifies the ferment of boys and girls who have very clear ideas about political priorities: peace, work, the fight against inequality, climate and environmental protection 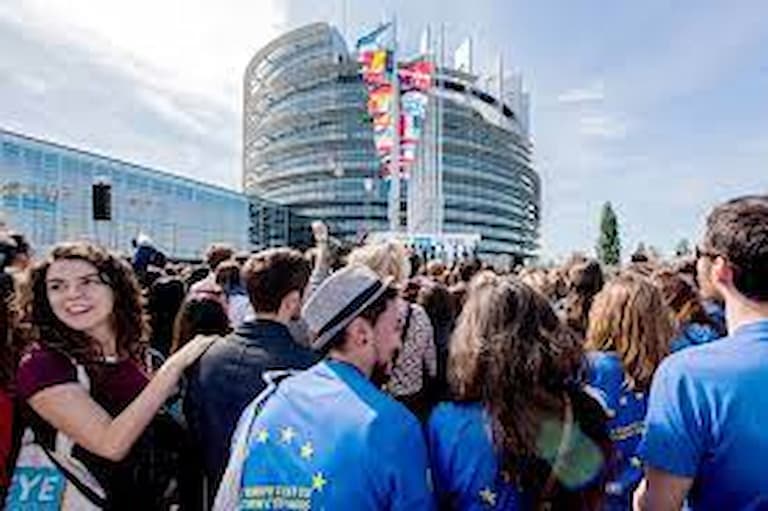 Source for the picture:
https://www.europarl.europa.eu/news/it/headlines/eu-affairs/20210916STO12703/eye2021-online-partecipa-e-dai-forma-al-futuro-dell-ue

A growing engagement of young people in the European Union. This is what emerges from the Flash Eurobarometer published on 6 May on the topic ‘Young people and democracy’. The results relate to the survey conducted between 22 February and 4 March 2022 on a representative sample of 26,178 young people aged between 15 and 30 in the 27 Member States via computer-assisted online interviews (CAWI). The survey takes stock of how young people feel during the European Year of Youth and the recently concluded Conference on the Future of Europe, where young people played an essential role.

The new Eurobarometer survey shows a growing engagement of young people: the majority of them (58%) are active in the society in which they live and say they have participated in the activities of one or more youth organizations in the last 12 months. This is an increase of 17 percentage points compared to the last Eurobarometer in 2019. Furthermore, for the European Year of Young People 2022, the most common expectation among young people is that policymakers will listen more closely to their demands and follow them up and that they will support their personal, social and professional development (72%).

“The European Year of Youth should lead to a paradigm shift in the way young people are involved in political initiatives and decision-making,” said Margaritis Schinas, Vice-President for Promoting the European Way of Life. “The objectives of the European Year are to listen, participate and promote concrete opportunities for young Europeans and the Flash Eurobarometer clearly shows that these objectives are exactly in line with the expectations of young people in the EU,” he continued.

“As you can see, young people are increasingly involved and committed to the future of societies. They care about peace, international cooperation, welfare, and the environment,” explained Mariya Gabriel, Commissioner for Innovation, Research, Culture, Education, and Youth. “But they want to be heard, and more. In the context of the European Year of Young People, we do everything we can to help them make their voices heard,” she continued. “I am pleased to announce that we have launched a new online tool, the ‘Voice your Vision’ platform, where young people can express their opinions and ideas on the future of the European project,” she pointed out.

The Commission has indeed launched a new online tool, the ‘Voice your Vision’ platform, to make it easier for young people to make their voices heard. Within the framework of the European Year of Youth, dialogues between the members of the College and young people on policy initiatives are also planned: a unique opportunity for young people to engage directly with policymakers and personally express their vision and ideas on all policy areas.

Russia’s war of aggression against Ukraine has reinforced among young people the conviction that the main objective of the EU (37%) is to preserve peace, strengthen international security, and promote international cooperation. The other priorities identified by young people in order of importance are: more job opportunities for young people (33%); fighting poverty and economic and social inequalities (32%); promoting environmentally friendly policies and combating climate change (31%).

Young people consider mental and physical health and well-being (34%), protecting the environment and combating climate change (34%), as well as education and training, including the free movement of learners (33%), to be priority areas for the European Youth Year.

Despite the pandemic, the survey shows an increase in the transnational mobility of young people compared to 2019, reflecting the strong willingness of young people to re-establish cross-border contacts. Around four out of ten young people (39%) have had a work, volunteering, study, or sports experience in another EU country. In 2019, it was just over three in ten (31%). Lack of economic means remains the main obstacle to participation in mobility projects, although it has decreased compared to 2019 (from 42% to 36%).

Finally, the Eurobarometer results confirm that the Erasmus+ program, which celebrates its 35th anniversary in 2022, is known by more than half of the young people surveyed, although some differences between the Member States remain: the highest percentage of young people who are aware of “Erasmus+ for students” is in Greece (72%) and Cyprus (70%) and the lowest in Sweden (26%).

The new “Voice your Vision” platform

The Commission has launched a new online tool, which will become a central element of the European Year of Youth. On the ‘Voice your Vision’ platform, Europeans can express their opinions and ideas on the future of the European project and address any topic they consider important: employment, inclusion, peace and security, climate change, education, mental health, etc. The ‘Voice your Vision’ platform responds to the ambition of the European Year of Youth to give young people the tools to participate in the public debate and decision-making process.